Pieces of the DC-9

A friend of mine and I have combed the beanfield several times, and have uncovered an enormous number of what I believe to be pieces of the DC-9 that were buried in the impact. It is amazing to think that pieces could still be there after 30 years, but the impact was huge, shattering the airplane into thousands of pieces, and the field was bulldozed after only a couple of days. (I have heard the analogy of dropping a large plate glass window onto concrete. Imagine the shattering and the explosive impact involved.) It is very believable that with each winter's freeze and thaw, and with each plowing of the field in preparation for the next crop, pieces would slowly work their way to the surface. Please

This is the memorial to the victims in Forest Hill Cemetery. You are looking toward the northeast. The burial plots are behind the large tree, and are not individually marked. About fifty feet away in the left background is an area with benches, and large concrete slabs with the names of the victims buried here engraved on them. Each person has an individual stone, set flush into the ground, but not necessarily where that person is buried (because it's not really known which remains were of which passengers). The large slab in this picture contains the first four lines of the Lord's Prayer, beginning on the side facing us, and ending on the other side.

This is the actual Piper Cherokee 140, N7374J, that came to grief in this accident. This picture was taken only days before the tragic flight, at the aircraft's base at Brookside Airport, Indianapolis. The plane was white with yellow trim.

And this is the actual DC-9, N988VJ (Douglas construction number 47211, line number 357), that was also involved in this accident. This picture is from a postcard, and is undated, but could not have been taken much more than a year prior to the crash. Interestingly, the plane is pictured sitting on the tarmac at Indianapolis Weir Cook Airport, which was its destination on the fatal flight. Also note that you're looking directly at the starbord vertical stabilizer; it was here, at a point just underneath the horizontal stabilizer, that was the impact point of the two aircraft. Thanks to Rev. Steven T. Hagopian for this amazing picture. 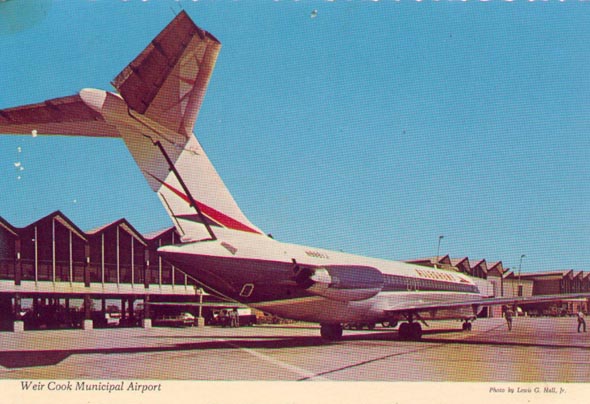 Here is another AMAZING picture of the accident aircraft on the tarmac at Indianapolis Weir Cook Airport.  It is a composite of two photos taken seconds apart by an unknown photographer on 12/24/68, and were graciously provided to me by a friend of an acquaintance of the photographer.  It is a terrible stitch, I know, but it is the best I could do with the varying foreground-background given the fact that the two pics were taken as the aircraft was taxiing.  The right number of windows are shown aft of the emergency exits!  And those familiar with the Indianapolis airport will recognize the gates and jetways as part of the old terminal building (still standing) that was retired in Nov 2008.

The Cockpit of a Cherokee 140

The Cockpit of a DC-9 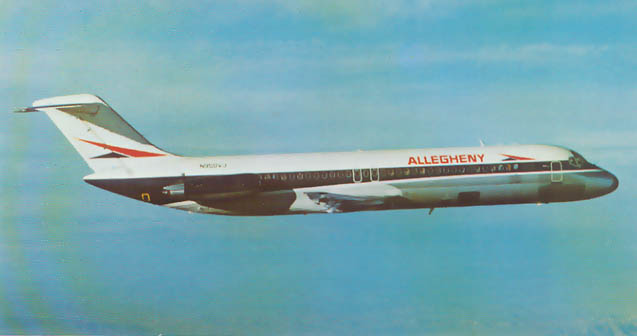 This is NOT the actual crash aircraft, but it is a great picture of an Allegheny DC-9-31

Investigation
The 140 and the tail section of the DC-9 being reconstructed in a hangar at Bakalar AFB, Columbus (thanks again to Rev. Hagopian for this picture)

On 9 September 1969, this syndicated cartoon appeared in newspapers nationwide, including The Indianapolis Star. The cartoon's theme is rarely, if ever, avaiation-related:

Go here to visit the crash scene. (Warning: This link is not to be viewed by those with any emotional connection to the victims. Please!)